Nina Cabezas-Wallscheid from the Max Planck Institute of Immunobiology and Epigenetics, presents her research on the regulation of dormant hematopoietic stem cells.

In the bone marrow of mice, hematopoietic stem cells (HSCs) are responsible for the production of billions of mature blood cells. HSCs are at the top of the hierarchically regulated system of hematopoiesis, and part of the cells are in a dormant, sleep-like state. Under special conditions, such as stress caused by infections, but also continuously during hematopoiesis, HSCs are activated and exit quiescence.

Whether blood stem cells in humans are also in such a dormant state is controversial. Nina Cabezas-Wallscheid has identified a signaling pathway that plays an essential role in controlling the quiescent state in both human hematopoietic stem cells and those of mice.

Nina Cabezas-Wallscheid has been a research group leader in the Department of "Cellular and Molecular Immunology" at the Max Planck Institute of Immunobiology and Epigenetics in Freiburg since 2017. In 2018, she was awarded the "Young Investigator Award" of the German Stem Cell Network (GSCN).

Title of the talk: Regulation of Dormant Hematopoietic Stem Cells

The seminar will take place hybrid. Please register with ivonne.roeppnack-jahnkeleibniz-flide. Access data will be sent to you in time before the event. 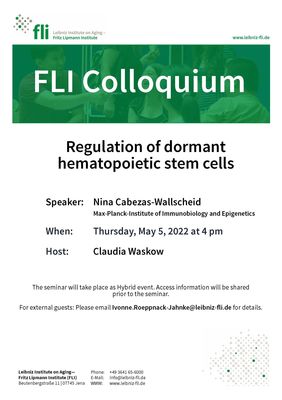 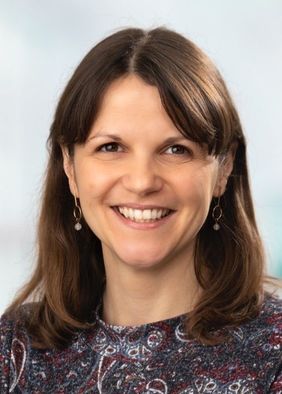