In acknowledgement of his research, junior researcher Francesco Neri from Jena, Germany, was awarded the Sofja Kovalevskaja Award on November 15, 2016, in Berlin. The prize, which is granted by the Alexander von Humboldt Foundation, is one of the most prestigious science awards in Germany and will be used to study the molecular causes of cancer in old age.

Jena. Why does the risk of accumulating mutations in cells and developing cancer rise during aging? This is what molecular geneticist Francesco Neri is trying to answer in his studies at the Leibniz Institute on Aging – Fritz Lipmann Institute (FLI). Investigating intestinal stem cells, he is especially interested in the role of DNA methylation – a chemical process by which the DNA of a cell in modified to react on environmental influences. Neri has developed innovative Next Generation Sequencing techniques to identify mechanisms, which are involved into this process and lead to harmful DNA changes instead of useful modifications. On November 15, 2016, the junior researcher was awarded the Sofja Kovalevskaja Award by the Alexander von Humboldt Foundation, one of the most prestigious science awards in Germany providing 1.60 Million Euro for future research.

Big Chance for a Young Scientist

"I am greatly honored to receive this award“, Francesco Neri happily states. “As an internationally renowned research institute in the area of aging research, the FLI offers me an optimal research environment. The award now enables me to fully concentrate on my own research focus.”

“The Sofja Kovalevskaja Award provides young researchers with a great opportunity to follow their creative research approaches on a nearly independent basis“, Prof. Dr. Karl Lenhard Rudolph, Scientific Director of Leibniz Institute on Aging (FLI), emphasizes the importance of the research award. The funding of the Alexander von Humboldt Foundation enables Francesco Neri to build up a new junior research group on “Epigenetics of Aging“ at the Institute in Jena.

Dr. Francesco Neri was born in Italy in 1981. He studied molecular biology and gained his PhD in biotechnology at the University of Siena. He did postdoctoral research at the Human Genetics Foundation in Torino from 2011 to 2016. He was also twice visiting researcher at Radboud University Medical Centre in Nijmegen, Netherlands during this period. He focused his research on the epigenetics of stem cells applying Next Generation Sequencing as a main approach. Since July 2016, Dr. Neri has been heading a junior research group at FLI.

The Alexander von Humboldt Foundation’s Sofja Kovalevskaja Award is named after the Russian mathematician Sofja Kovalevskaja and is one of the most highly endowed research awards in Germany. Funded by the Federal Ministry of Education and Research, it is granted to young exceptionally promising researchers from abroad in recognition of outstanding academic achievements. The award is designed to enable them to embark on academic careers in Germany by establishing their own junior research groups at research institutions in Germany. The Kovalevskaja Award is endowed with up to 1.65 million Euros. More information on the award can be found on http://www.humboldt-foundation.de/web/start.html. 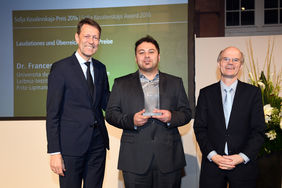 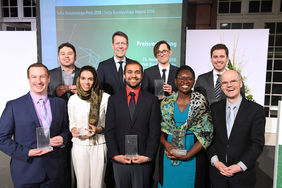