The two doctoral students Dario-Lucas Helbing and Nova Oraha won this year’s “Medical Excellence” Scholarship of the MPL AG. The aspiring medical scientists are working in Helen Morrison’s Research Group at FLI. They receive a payment of 3000€ and an annual access to SpringerMedizin.de journals.

Every year, the financial service provider MLP awards excellent medical talents in four disciplines and with six special scholarships under the patronage of the board of trustees consisting of several professors in medicine. Dario-Lucas Helbing and Nova Oraha have been chosen for two of the 18 scholarships by the board of trustees of the MLP. They were able to prevail against hundreds of other candidates with their application and during the assessment center with their oral presentations. "We are really happy about this funding and the associated recognition for our work", say the both MD students.

Dario-Lucas Helbing, who is actually working at FLI on his doctoral thesis, has been selected for a scholarship in the category "Science Excellence". He was able to convincingly present his research work and promising scientific results. The board of trustees awarded three scholarships in this category for medical-scientific achievements of the students.

Nova Oraha, also MD student doing research at FLI, won the scholarship in the category "Social Excellence", in recognition of his social commitment in the medical environment. He is dedicated to helping refugees and international students in offering support and orientation in medical studies. Thus, he conducted a tutorial in Histology for refugees and international students, which was funded by the state of Thuringia during the "STAY" initiative. There were three scholarships awarded in this category. 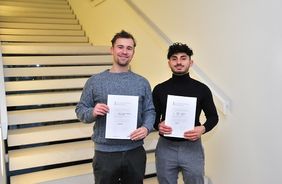