The Art of Dividing (MPI-MG)

A basic requirement for growth and life of a multicellular organism is the ability of its cells to divide. A protein complex, the so-called centrosome, plays a major role during cell division. Scientists at the Max Planck Institute for Molecular Genetics in Berlin, together with colleagues at the German Cancer Research Center in Heidelberg and at the Leibniz Institute for Age Research - Fritz Lipmann Institute in Jena have investigated the functions of the different centrosomal components. The researchers now present the centrosome's components and their functions. Their work extends our knowledge of regulation of cell division and opens the door to new investigations into cancer development. (EMBO Journal, September 3rd 2010).

During cell division chromosomes duplicate and are then distributed among the daughter cells. This distribution is organized by the centrosome, a protein complex made up of several hundred different proteins. In cancer cells, the centrosome often assumes an unnatural shape or is present in uncontrolled numbers. The reasons for this were previously largely unknown. As part of their research, the scientists examined centrosomes of the fruit fly Drosophila as well as those from human cells. "The fruit fly is a terrific system for investigating the centrosome, because the basic mechanisms of cell division are very similar between fly and human", explains Bodo Lange, the research group leader at the Max Planck Institute for Molecular Genetics. The group isolated centrosomes from the eggs of fruit flies and, using mass spectrometry methods, identified more than 250 different proteins making up this complex. These components were then subjected to targeted inactivation through RNA interference (RNAi), to discover their role in the structure of the centrosome and in chromosome distribution. The scientists were able to determine the protein functions quantitatively through use of state-of-the-art automatic and robotic microscopes.

They found a whole series of proteins responsible for the separation of chromosomes, number of centrosomes and their structure. As these characteristics are often disrupted in cancer cells, the researchers believe their findings will have a significant impact on the understanding of cell division and the development of cancerous diseases.

The work of these scientists has brought new insight into the abnormalities seen in cancer cells. "Based on our findings, we hope to be able to unravel regulatory networks in the future, which will help to target and interfere with the division of cancer cells." 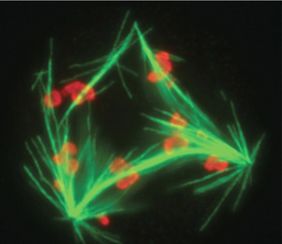