Researchers have identified a fundamental mechanism in human cells: the lipid PI(18:1/18:1) interrupts typical stress reactions and prevents cell death. If this process becomes unbalanced, it can have harmful consequences and promote diseases such as cancer and diabetes. A team of scientists led by Andreas Koeberle from the Michael Popp Institute at the University of Innsbruck published their study in the journal Nature Communications.

Programmed cell death is an important tool that an organism uses to keep itself healthy. When a cell does not function as it should, various stress reactions are activated. The goal of these reactions is to restore the original cell function.

One example is autophagy, a process in which the cell partially digests itself to gain energy, which it can then use for its own repair. If these attempts should fail, the cell dies. This allows the body to fight diseases such as diabetes, cancer, neurodegeneration and infections.

Stress responses, however, are a double-edged sword and must be kept in balance to be beneficial to the body. That is why cells also contain substances that stop stress reactions and inhibit cell death.

An international consortium of research groups led by Andreas Koeberle from the Michael Popp Institute at the University of Innsbruck has now been able to prove that a membrane lipid called PI (18:1/18:1) is significantly involved in this process. The study, published in the research journal Nature Communications, opens up many interesting medical possibilities.

The regulation of stress reactions involves many different enzymes. One of them is the enzyme SCD1. It converts saturated fatty acids into unsaturated ones and is therefore particularly effective against stress that is triggered by fats in harmful concentrations.

In principle, this process benefits the organism’s health. However, it can become dangerous if carried out excessively. Researchers have long seen a clear connection between SCD1 and inflammation, metabolic diseases and cancer. The full functional scope of this enzyme is still unknown. As a consequence, treatments that specifically inhibit SCD1 can lead to severe side effects and are not approved for therapy.

Researchers have now been able to trace the stress response-inhibiting effect of SCD1 back to an indirect product of this enzyme: The membrane lipid PI(18:1/18:1), which is largely composed of a fatty acid produced by SCD1.

In the future, PI(18:1/18:1) could be specifically administered or its formation inhibited. This could fight diseases without having to disrupt the full range of functions of the enzyme SCD1. However, the whole range of PI(18:1/18:1)’s functions must first be thoroughly researched and understood.

"What is particularly interesting is that stress-associated processes, such as the ageing process, resistance to chemotherapy or the development of tumours all influence the amount of PI(18:1/18:1) in the affected tissues. There is a clear connection that opens up new therapeutic approaches," says Andreas Koeberle.

"We have deciphered a very fundamental process with this study," he adds. "It’s a significant starting point and sets new directions for further research."

Natural products as a source of ideas

At the Michael Popp Institute of the University of Innsbruck, researchers study the molecular pharmacological effects of plant-derived natural products. The research work that has now been published was initiated through the application of active plant substances.

"We wanted to find an overriding mechanism that takes place in the body, regardless of the pathway by which cell death occurs," says Koeberle. "To do this, we used plant substances that have a toxic effect on cells, for example myrtucommulone A, which is obtained from myrtle. When this substance was added, we could observe clear changes in the composition of the cellular lipids and that's how we came up with the idea for this project. So, in a way, the natural substances were the starting point to gather ideas and learn what's going on in the human cell." 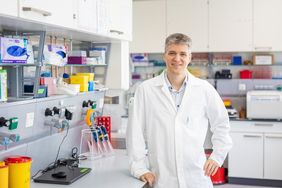