Planarians are very plastic animals. Due to a high number of stem cells, planarians are able to regenerate a new individual from a tiny fragment of their body. Researchers of the Leibniz Institute on Aging – Fritz Lipmann Institute in Jena, Germany, together with colleagues of the Spanish National Center for Cardiovascular Research in Madrid, Spain, now investigated the planarian stem cell pool under conditions of starvation. Their results show that long telomeres are a major characteristic of adult stem cells in planarians. Starvation has a positive effect on the adult stem cell pool, as starved stem cells show a higher telomere length. The results are now published in the Journal Stem Cell Reports.

Jena. Planarians are very plastic animals. They are able to regenerate whole body parts; even from a tiny fragment of their body, they are able to regenerate a new individual. This amazing regeneration ability is due to their somatic stem cell pool, which is able to infinitely replace old or damaged cells. As in their natural surrounding periods of food scarcity occur, they developed astonish survival strategies under starvation: they can shrink in size and then regrow if they get food again always maintaining their stem cell pool. Because of the astonishing plasticity, they are used as model organism for example in aging research.

A research team around Dr. Cristina González-Estévez of the Leibniz Institute on Aging – Fritz Lipmann Institute (FLI) in Jena, Germany and the Spanish National Center for Cardiovascular Research in Madrid, Spain now investigated the development of the planarian stem cell pool under conditions of starvation. “The central question is how starvation regulates somatic stem cells”, tells González-Estévez about the motivation behind the study. It was already known that starvation has a positive impact on stem cells, but the underlying molecular mechanisms remained unclear. Planarians with their astonishing regeneration capacity due to the high number of stem cells are therefore a good model organism to address this question.

Telomeres are repetitive sequences at each end of a chromosome that protect them from deterioration and fusing with other chromosomes. Over time, during each cell division, these telomeres become shorter. This shortening has been shown to be associated with aging and aging-related diseases in different organisms such as mice and humans. The international research team now investigated stem cells and their telomere length in planarians. “Our results show that long telomeres are a major characteristic of adult stem cells in planarians”, says González-Estévez.

But what mechanisms are behind this? The researchers have two different hypothesis explaining the result: It might be the case that during starvation those stem cells with longer telomeres tend towards symmetric divisions forming two new stem cells. Another possibility would be that stem cells with long telomeres increase self-renewal when mTOR signaling is down whereas those with short telomeres die or differentiate.

The results of this study underline the positive effect of fasting on the adult stem cell pool and telomere length, which is associated with longevity. Further studies based on the experimental methods refined in this study should reveal whether the relation between the mTOR pathway on stem cells and telomere length could be also shown in other model organisms or even humans. 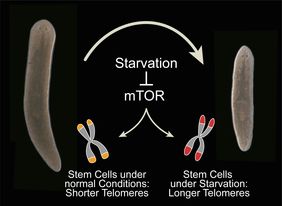