Back to sleep: How SETD1A takes blood stem cells to rest

In old age, humans increasingly suffer from infections. In such a case, blood stem cells that are usually inactive are activated in order to produce as many blood and immune cells as needed to fight the infection. However, every cell division entails the risk of accumulating DNA damages, which subsequently can prevent stem cells to become inactive again. Damaged cells are usually detected and eliminated, but if all stem cells are gone, there will be no more reservoir feeding into the mature immune cell pool to defend the body during the next infection. Now, researchers from Leibniz Institute on Aging (FLI) in Jena, Germany, have identified a central mechanism related to the enzyme SETD1A, which is responsible for detecting and repairing DNA damages in blood stem cells and, hence, is crucial for blood stem cells go back to sleep after infections.

Jena, Germany. Stem cells are our body’s emergency reserve. In the blood system, so-called hematopoietic (blood) stem cells are responsible for continuously producing immune cells. This process, called hematopoiesis, is strictly regulated to make sure that the number of produced cells correlates to the actual need. However, every cell division also entails the risk of DNA damage accumulation that may result in loss of function and possibly even in cancerogenic transformation – the development of cancer. This is why stem cells usually rest in so-called quiescence to avoid attrition. During an infection, the number of immune cells needed is heavily rising, forcing blood stem cells to be activated in order to replicate and generate new immune cells. Subsequently, blood stem cells fall back to rest. In old organisms, this process is impaired because the accumulation of DNA damage increases over repeated cycling activity. Damaged cells are detected via a sensory system and are removed, which may result in the continuous reduction of the size of the available stem cell pool. So far, it was known that particular DNA repair pathways are necessary to repair DNA damages. However, it was totally unclear how DNA repair pathways are activated.

Together with other scientists from Dresden, Heidelberg and Berlin, Prof. Dr. Claudia Waskow – Senior Group Leader at Leibniz Institute on Aging (FLI) in Jena, Germany and at Technical University Dresden, Germany, holding a professorship at Friedrich Schiller University in Jena as well – and her team have identified an epigenetic mechanism, which in mice regulates the activation of the DNA damage response in blood stem cells and, thus, helps them back into their quiescence. Results have been published in Journal Blood.

Biologist and aging researcher Waskow and her team found histone-3-lysine-4-methyletransferase SETD1A to regulate the activation of all known DNA repair pathways by means of a so-called epigenetic histone modification. These epigenetic switches work by adding defined molecular entities to particular gene segments, thus ‘marking’ this gene and making it available for being read. This is how SETD1A regulates whether gene segments, which are responsible for repairing DNA damages of blood stem cells, are activated or not. SETD1A was identified as the main driver of labeling the molecular groups and providing the whole repair machinery in blood stem cells, a process that is pivotal for the organism: In mice that lacked this genetic modifier, blood stem cells that had been activated during an infection, could not return to quiescence anymore. Blood stem cells accumulated DNA damages preventing the generation of mature immune cells, which resulted in a dramatically reduced survival rate after infection.

It may be possible to shorten the critical phase after infections

“The number of specific functions of SETD1A is really surprising”, explains Prof. Dr. Claudia Waskow. “Not only does SETD1A activity regulate the detection of DNA-damage in blood stem cells, but it also controls their repair. Simply spoken, SETD1A is crucial for the maintenance of blood stem cells”. If DNA damages in stem cells can be repaired fast and properly, they can go back to their resting phase more quickly, and further attrition can be avoided. This is how blood stem cells can be maintained to be available for reactivation during the next infection.

Since the repair mechanisms of SETD1A are based on epigenetic modifications, it may be possible to chemically control SETD1A activity. This can potentially provide a future approach for a supportive treatment after infections. “Especially in elderly people with a weaker immune system, the controlled increase of SETD1A activity could affect the return of blood stem cells back to quiescence in a positive way to maintain them for the next infection”, Prof. Waskow concludes. 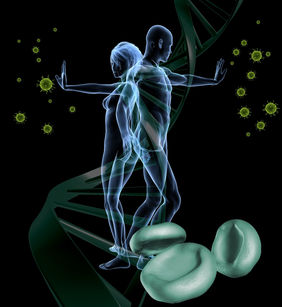