At the Leibniz Institute on Aging - Fritz Lipmann Institute (FLI) in Jena, in a joint appointment with the Friedrich Schiller University Jena (Medical Faculty), Prof. Dr. Dario R. Valenzano has taken up a professorship and the leadership of the senior research group "Evolutionary Biology / Microbiome-Host Interactions in Aging". With the new research focus "Microbiota and Aging" at the FLI, the changing composition of the microbiome of an aging organism and its influence on the development of age-associated diseases is in focus, thus expanding and additionally strengthening aging research in Jena.

Jena. In March 2018, the “Gemeinsame Wissenschaftskonferenz” (GWK, Joint Science Conference) approved the establishment of a new research focus "Microbiota and Aging" at the Leibniz Institute on Aging - Fritz Lipmann Institute (FLI). The approved funding of two junior research groups will be strengthened by the FLI through the additional provision of a new senior research group. The latter will be installed as a W3 professorship in a joint appointment with the Friedrich Schiller University Jena (Faculty of Medicine). Dr. Dario R. Valenzano from the Max Planck Institute for Biology of Ageing in Cologne has accepted the professorship in Jena and has initiated his senior research group "Evolutionary Biology / Microbiome-Host Interactions in Aging" at the FLI in July 2021.

With the new research focus, the changing composition of the microbiome of an aging organism is the center of interest. The aim is to clarify the contribution of an organism's microbiota (i.e., the microbiome) in the onset and prevention of age-associated diseases and dysfunctions. This new focus on the role of the microbiome during aging is an important addition to existing research projects at FLI, which are investigating, among other things, the ability of organ maintenance (homeostasis) as well as regenerative capacity during aging in different models.

"Prof. Valenzano is a world-renowned pioneer in aging research, using the genetic model organism of the turquoise killifish. The addition of Prof. Valenzano to the FLI not only significantly strengthens our institute's existing expertise in the use of the killifish as a model organism, but also allows the FLI to become a leading international center for the use of the killifish model in aging research," emphasized FLI Scientific Director Prof. Alfred Nordheim. "Furthermore, Prof. Valenzano's broad scientific expertise promises to stimulate sustainable research in the fields of immunobiology and genome evolution beyond aging-related microbiomics, together with our collaborative partners at the Jena research site."

In addition to Prof. Valenzano's W3 appointment, two new junior groups are to be established at FLI in the near future, thematically expanding the FLI research focus "Microbiota and Aging". The junior groups will work on the topics "Microbiome-induced epigenetic changes in the host organism" and "Metabolite signaling in the microbiome-host interaction". The appointment process for this position is already underway and is expected to be completed before the end of 2021.

Dario Riccardo Valenzano, born in 1977 in Bari, Italy, studied neuroscience at the Scuola Normale Superiore in Pisa, Italy. From 2006 to 2013, Dr. Valenzano worked in the research group of Dr. Anne Brunet (Department of Genetics) at Stanford University in Stanford, USA; first as a Postdoctoral Research Fellow and then as a Research Associate.

From 2013, Dr. Valenzano led the research group "Evolutionary and Experimental Biology of Aging" at the Max Planck Institute for Biology of Ageing in Cologne, Germany, and has been Principal Investigator in the Cluster of Excellence CECAD at the University of Cologne since 2016. Since July 2021, he is Professor at Friedrich Schiller University Jena (Faculty of Medicine) and group leader of the research group "Evolutionary Biology / Microbiome-Host Interactions in Aging" at the Leibniz Institute on Aging - Fritz Lipmann Institute (FLI) in Jena.

His research team studies the genomic basis of short and long lifespan across various animal species and investigates the role of gut microbes during the aging process. His most important model system is the naturally short-lived turquoise killifish (Nothobranchius furzeri), which he studies both in the laboratory and in its natural habitat in the African savannah. 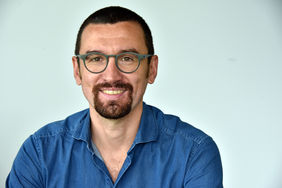 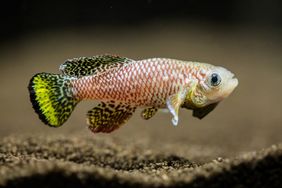 With a lifespan of 3-4 months, the Turquoise killifish (Nothobranchius furzeri) is the shortest-lived vertebrate that can be kept under laboratory conditions. (Source: FLI / Nadine Grimm)