This year there will be again various events in Jena as part of the international March for Science. In addition to a panel discussion, e.g. questions of science will be taken from their academic context and discussed together in small science pubs.

During the March for Science 2017, the values, responsibility and credibility of science were debated worldwide. Symposia of German scientific organisations identified a need for action and research in autumn 2017. The public pressure on politics, business and science to act has grown. Populists attack scientific institutions as part of a social elite and question science as a whole.

On the occasion of the international March for Science 2018 on April 12 representatives of science, politics and the media will be debating in Jena under the auspices of the President of FSU Jena, Prof. Dr. med. Walter Rosenthal, the following questions: 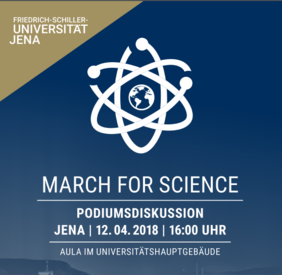